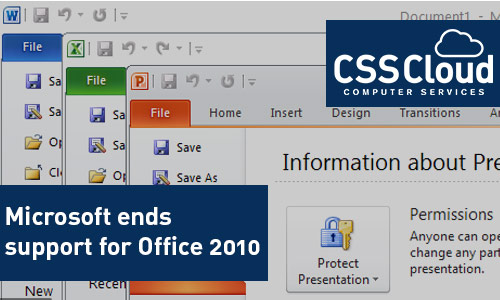 Office 2010 is now a decade old and in technology terms that’s positively ancient! So although your trusty copies of Word and Excel may still fire up and chug along, it is sadly time to say goodbye to an application that at one point was licensed on over 200 million PCs.

This is because Microsoft will be removing support for Office 2010 in October of this year and that means no more technical support, no more fixes and patches and importantly, no further security updates. Due to this, continuing to use Office 2010 will leave a gaping hole in your organisations security as hackers could exploit the outdated technology to gain access to your PCs and data.

On a more slightly less dramatic level, the software is now old and will be unable to open or read files properly from the newer versions that are now widely in use, and you will notice much smoother integration with other programs.

In the past, upgrading or replacing Office would have meant buying a new version of the application outright, knowing that in a few years’ time you would have to do that again in order to stay up to date. And although there are fans of this form of software purchasing, it is now quite rare. Microsoft 365 (formerly Office 365) is now the default way to purchase Office, in fact Microsoft make it difficult and expensive to do anything but go on the subscription model. This of course has the benefits of a much smaller initial outlay and a small ongoing cost, but another big advantage is it also means that your software never reaches end of life as it is always the latest version. You will never need to upgrade it again!

Users upgrading from Office 2010 will benefit from far more productivity features and options within the latest Microsoft 365 versions, and amongst the familiar programs such as Word, Excel, Outlook and PowerPoint you also have Publisher, Microsoft Teams, MileIQ, Yammer, OneDrive and a suite of other useful applications. Those companies who have in-house databases dependent on Microsoft Access can also breath a sigh of relief as it is still going strong and included with the above.

The process to upgrade from Office 2010 to the current versions can be a bit laborious, however it is something that we are well versed at. Our recommendation at CSSCloud is to talk to us today so we can help plan your upgrades with the minimum of fuss and downtime, before the software moves on to join its Windows 7 operating system counterpart in the software scrapyard.

Please use the form below to send us an email.

We aim to respond to all messages within one working day.

When you need assistance outside of normal office hours, CSSCloud offers all of our customers a comprehensive "Out of Hours" service.